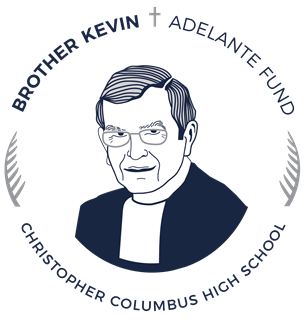 Named after former president Br. Kevin Handibode, the Br. Kevin Adelante Fund provides tuition assistance to qualified students whose families lack the financial resources for enrollment. The Fund helps make a Columbus education more accessible to a diverse and talented student body.
By donating to the Br. Kevin Adelante Fund, you will be helping families who value a Marist Catholic Education but without assistance would not be able to send their sons to Columbus. There are strict guidelines in place to evaluate and approve families for the financial aid.

Since 1966, Br. Kevin Handibode has served Christopher Columbus High School in many capacities to include teacher, dean of discipline, basketball coach, athletic director, development director, and principal. For 18 years, he served as school president, a position he stepped down from in July 2019. Today, he continues his service to Columbus in the development program, a program he started in 1980.

Devoted to the Marist principles of forming young people as good Christians and good citizens, Br. Kevin is well known for his constant outreach and care for the young, especially for his efforts to provide educational opportunities to students of various economic levels.

Often referred to as “Mr. Columbus,” Br. Kevin is a hero to the thousands of young men whose lives he has helped to shape. The Br. Kevin Adelante Fund, launched in 2019 as Br. Kevin retired from the role of president, helps his legacy live on at Columbus.
Christopher Columbus High School | 3000 SW 87 Avenue | Miami, FL 33165 | (305) 223-5650
Brotherhood, Faith, and Scholarship define the Marist Brothers Catholic education at Christopher Columbus High School.  By making Jesus Christ known and loved and creating an inspiring academic and extracurricular environment, we prepare young men for higher learning and a life-long commitment to leadership and service through Gospel and Marist values.
Columbus is fully accredited by Cognia and is a member of the Marist Association of Secondary schools, the National Catholic Education Association and the Independent Schools of South Florida.