A Place for Every Explorer 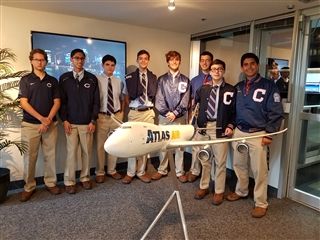 In addition to the wide range of athletic programs and societies that Columbus offers, CCHS staff members also moderate over 50 student clubs and activity groups. These organizations cover a broad range of interests that include professional, international, religious and special interest clubs and organizations.
The Student Activities Committee (SAC) is always available to help you find a club that best suits your needs! If you don’t see a club below that interests you, work with the SAC to start your own. Don’t hesitate to get involved and always listen for announcements about club meetings.

Christopher Columbus High School | 3000 SW 87 Avenue | Miami, FL 33165 | (305) 223-5650
Brotherhood, Faith, and Scholarship define the Marist Brothers Catholic education at Christopher Columbus High School.  By making Jesus Christ known and loved and creating an inspiring academic and extracurricular environment, we prepare young men for higher learning and a life-long commitment to leadership and service through Gospel and Marist values.
Columbus is fully accredited by Cognia and is a member of the Marist Association of Secondary schools, the National Catholic Education Association and the Independent Schools of South Florida.